No Saving the Day (Wolfsbane by Andrea Cremer) 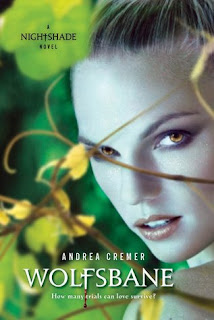 Possible spoilers ahead, if you haven’t read Nightshade or Wolfsbane

When Calla Tor wakes up in the lair of the Searchers, her sworn enemies, she's certain her days are numbered. But then the Searchers make her an offer, one that gives her the chance to destroy her former masters and save the pack and the man she left behind. Is Ren worth the price of her freedom? And will Shay stand by her side no matter what? Now in control of her own destiny, Calla must decide which battles are worth fighting and how many trials true love can endure and still survive.

And if you look to the right, you'll see a beautiful cover of Wolfsbane. It's the one we got some time after Nightshade's release and I was so looking forward to it! But then I never found it anywhere. It was sad. It's so pretty (not that the others aren't)! So I'm using it here.

So, I have calmed down enough to put my thoughts into words and I’ll try my best not to FANGIRL too much. I’m sorry, if this is not coherent.

Now let me start by saying to people who might have stumbled upon this via google or something else, to people who might be wondering, hey, should I start reading this series, should I grab Nightshade? And I know this is about Wolfsbane, but if there is anyone out there who still has doubts about picking this series, I tell you: GO FOR IT. Even if you don’t like the story or the characters, I dare say you will come out of it richer from two things: One, I’ve said this several times and I will say it again. I’m a vampire girl and werewolves are a little difficult for me sometimes. To be cruel, I demand more from them. And boy, does this series deliver with werewolves! I just adore the way Andre Cremer writes werewolves, all the instincts and how it’s this two parts of one that sort of work together (or that’s how I see it) and all the magic and ugh, it’s beautiful.
Two, I feel like I should give Andre Cremer a standing ovation, except that would be awkward since it’s just me. But this writer is so talented. You know how there are just some writers out there, whose writing styles just hits you and gives you shivers and you just want to read it out loud and scream because it’s so beautiful? Yeah, Cremer’s definitely one of those writers for me and that, is one of the reasons you should give her books a try.

Okay, on to the “review”. I’m calling it a “review” mainly because there’s too much FANGIRLING going on to actually be taken horribly seriously. Plus, I’m still sort of running high on this book, since it’s a huge emotional rush. I sort of hurried through this book and now that I’ve posted this, I’ll start Bloodrose. Then I think I’ll re-read all three and give it a thorough reading. I think I might just hurry through Bloodrose, too.

Okay, this book is a big emotional rush. Some books move very quickly and there’s that huge tension hanging above your head and this has just that feeling. Nightshade was just a launching pad for this and this is the moment when the rocket is soaring through the air really fast and you’re enjoying the ride though you don’t know where you’ll land. It reminds of the nights when I read the Hunger Games trilogy and jumped up and down on my bed everytime something happened.

What most stood out for me was this undecidedness - Calla’s in a bad situation and in a way, so is anyone. But because we see things from Calla’s point of view, it’s heightened. And you can feel Calla’s head going on overdrive and it is so beautifully written, it makes you uncomfortable. This is a point I’d like to know if other readers felt it, too? But basically, Calla’s at a crossroads and she’s got so many people’s lives leaning on her and you can feel the pressure that she feels. Also, at this point in my life (god that sounds so cliche and stupid) her situation hit so close to home for me and that might be the reason that I felt for her so well. But if you’ve read this, tell me!

Everytime Calla says “pack” I just wanted to fist pump the air. The magic of Wolfsbane’s world is one of the most thrilling things in this book and the wolves are another. There are so many moments when Cremer just wields them both so amazingly it gives you an adrenaline rush. And the action and the danger feel so real and close to you. These days, it’s always a pleasant surprise when a writer can make you feel the danger the characters feel. That’s what I want in a book (if it features action like this).

Also, again, Cremer excels at side characters. You know, people who just pop in and act in the background? Except with Cremer, no character just pops in, they all have their moments and you can feel how fleshed out they are. And maybe it’s Calla - though I feel like she might not be the best person to trust with relationships - but we really see the people for who they are. I don’t want to spoil anything but people who broke my heart and who I want long, detailed stories about are Ethan, Adne and Connor. And the other packmates, too! (I’d say more, but that would be really spoilery. But if ou’ve read the book and agree, high five!)

Also, I still love Shay a lot, though in this book, I liked him far less. It was almost like he couldn’t see the pressure Calla was under. He seems like a survivor, who’ll go through anything if he just decides so, but Calla had others than herself to think about and I almost felt like he forgot that sometimes and thought of just the two of them as a team. That might be where Ren comes in and I saw some of that in Nightshade, now that I think back. I did warm up to Ren a little more in this book, which is really hilarious when you think he was missing almost the whole time. I will be curious to see how things play out in Bloodrose.

But I do have to say this and this has nothing on this book in itself. But I am slowly getting tired of love triangles. I’m sorry and this has nothing to do with authors, it’s just something that for me is bordering on something that should almost deserve a trigger warning. A part of me hopes that Calla would be like, yeah, I don’t want neither of you, to Ren and Shay and just ride on in to the sunset with her pack.

But I just have to say some things that I love about this series, that just blow me away each time.

The little thing that it’s almost like this isn’t about Calla. Shay’s the one everyone really cares about and she’s the “normal one” (you know, in the way she’s supposed to follow rules and not care about anything else). She’s the one who’s pulled from her life - even if she doesn’t have to.
It’s more often the girl who’s the special one that everyone wants as their pawn - in here it’s pretty obvious to the Searchers that Calla’s Shay’s girl and he doesn’t want them to hurt her. Otherwise they would have, I think. But she’s the love interest who leaves to protect the special snowflake - and yet she’s the main character. That is so exciting to me and I feel like Cremer should get applause for that!

Also, details that have gone in to planning in this story and its background and magic and the whole worldbuilding? It seems to me like a classic old school fantasy world that’s been modernized a little and given a lightsaber.

I have to talk about the wolfs’ wolfiness (it IS a word). I’m still a vampire girl through and through, but in this series I think I’ve found the perfect “werewolf”.
The way Cremer writes them! I love it that they’re just this one being and not two sides fighting for control the way it usually is. There’s nothing wrong with that but this is just so much more compelling! I remember Calla saying, I think it’s in Nightshade though I cna’t find it right now, “I’m always wolf and human. I just choose the appearance.” It’s awesome. (If you can find the quote, do tell me. I can’t and it’s annoying.)

Final thoughts: It’s so hard to say something that would end this. I mean, I loved the book, I’d buy it again if I had to, if it spontaneously combusted or something. I definitely recommend it to anyone who looks for a book with lots of details in characters and worldbuilding. The plot is excellent, you can’t guess it(not the important parts) and the writing is most excellent!