Mother Raised No Fool (The Madman's Daughter by Megan Shepherd)

Review of
The Madman’s Daughter by Megan Shepherd 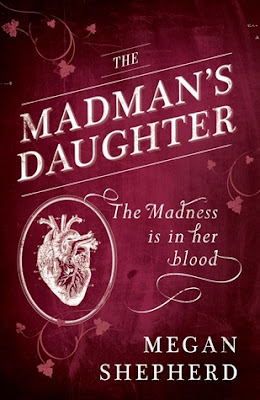 To uncover the truth means risking all...

London, 1894, Juliet Moreau has built a life for herself working as a maid, attending church on Sundays, and trying not to think about the scandal that ruined her life. After all, no one ever proves the rumours about her father's gruesome experiments. But when she learns her father is alive and continuing his work on a remote tropical island, she is determined to find out if the accusations were true.

I was so very hesitant about this book. I’d heard good things, but couldn’t remember what exactly people had liked. The summary on the book is pretty good, but still it doesn’t give away too much. That’s of course a good thing, but when I glanced at the pages, Juliet’s voice wasn’t that impressive.
I think I might have conflicting feelings, but we’ll see.

Juliet Moreau, who is the narrator of our story, has been quite the ordeal. Kicked out of society and then being left all alone in the world. In the first couple of chapters, I think Juliet’s her strongest, she knows her way around and without these chapters she’s stay a stranger to the reader. She’s quite book-smart, in having read her father’s books thanks to her curiosity, which also is a big part of her character and storyline.
She’s used to having to stand steady even when somebody tries to take her down and after the first scenes, we start getting a glimpse of who Juliet really is underneath her tough exterior. And I don’t think she really knows herself: especially when she gets to the island, she starts doubting everything and everything around her becomes unknown. Even then she keeps fighting, though she falters.
But because she’s the narrator, we remain unsure with her and that makes it hard for me to get a solid grip of her. I do like Juliet, she’s straight-forward and honest in her narration and she’s a survivor.

And because Juliet is a first-person narrator, it gives the book a chilling claustrophobic feeling at times, like as if the danger with Juliet is also with the reader. Sometimes her uncertainty is annoying, but it does make you feel uncertain as well so that uncertainty is a big part of the book. Just, at times it did annoy me as she went back and forth, but it did seem to belong in the book, so I can’t really hate it.

Slightly spoiler-y: Now, besides Juliet, there were several important characters, that perhaps quite didn’t rise to main character-status, that I truly cared about. (I can’t decide, mainly because it’s so very much Juliet’s story.) The story focuses mostly on Juliet, though several characters get their time and moment and even if it’s a tiny moment, you start caring for them. Several characters’ fate had me making weird noises out loud, so that people around would look at me weirdly. (I was reading this at work.) I loved how much we learned about the people around Juliet just through brief moments and where most of what we learned was thanks to their behavior and not words.

Now, the plot is pretty basic. It’s simplicity really is what makes it good and makes the book so tightly-woven and at times really claustrophobic. And even though it really keeps up the same, steady pace, some points seem to just fly by because they are so very action-filled and well, even a little scary. I could tell you about several times that had me scared for the characters, that really had me on the edge of my seat.
Part of what I loved in the book was the threat of creepy, madness and even danger. It wasn’t something that any of the characters mentioned and even though the narration focused on it at points, it seemed to still lurk at the corners. It was brilliant. I pretty much picked up this book because of the mystery and the need to know what the hell the madness actually means (in this book).

I did end up guessing the “big revelations” and where the story went. But partly thanks to Juliet’s narration, I didn’t believe my guesses. Some things were obvious to me even before Juliet or anyone else believed them, but then Juliet realized some things I hadn’t until she said them. The narration keeps you on such a tight leash throughout and you do feel a little like some thing’s about to creep up on you.

I perhaps would have liked a little different view on the whole madness-theme. Thanks to the summary, I had expected something big, grand and perhaps a big showdown involving it and Juliet. But in the end it does end up being a very small theme that while it is discussed, the madness that Juliet faces, I wasn't really that impressed by it. There are other things that take over, the mystery for example, so while it doesn't make the book bad, it did disappoint me a little.

But one of my absolute favorite things about the book is the ending. I’m not going to tell you anything but that it’s quite abrupt and it doesn’t really end where you think it would, but that just makes it so much better! The ending is so very perfect and I screamed out loud at the book and I really loved it.
I might have been annoyed at some of Juliet’s doings, but that ending pretty much fixed everything.
And that gets to me to the other thing. There's a sequel. Since I loved the ending so much, my first reaction was a big disappointment. But then I started itching to read more, so we'll see.

Final thoughts: If you’re looking for a mystery, this is the book for you. Though it focuses briefly on others, it tells the story of Juliet, who tries to solve the mystery of her father’s island, while fearing herself and those around her. The book tricks you into thinking it’s harmless with its slow pace and long sentences, fancy word choices. And then it stabs you in the back.
Posted by Joa at 8:56 PM