Interlude: the House of Hades

So on Friday, I think, Rick Riordan revealed the cover for the House of Hades, the fourth book in the Heroes of Olympus series. I do realize I'm a little late to the cause but hey, I blog what I want. 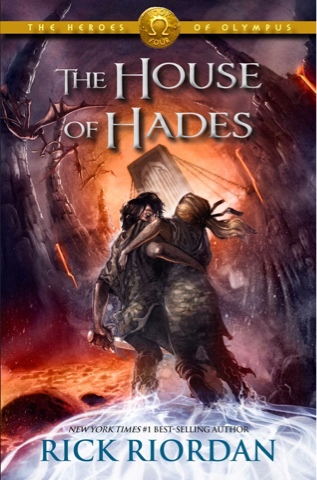 And that's the US cover. Now, before the Mark of Athena was published I counted down the days on this blog. I'm still pretty proud about that 30 day marathon.
But the closer we got to the House of Hades anticipation, the less excited I was feeling. This has to do with what I was discussing in a previous Interlude about some personal book problems. But this cover? Boy, it's got me excited! I'm already thinking about what to do on the blog. Probably not another 30-day-thing, but something. But that's a long time in the future and anyways.
Oh, let me mention the UK cover. I'm not always so much against the UK versions, usually I have my favorite and I want the same versions of all the books in the series (unfortunately this hasn't happened with either the Percy Jackson series nor Heroes of Olympus). But when it comes to the UK covers in this series or some of Riordan's other ones? Ugh. I prefer the US ones. Just look: 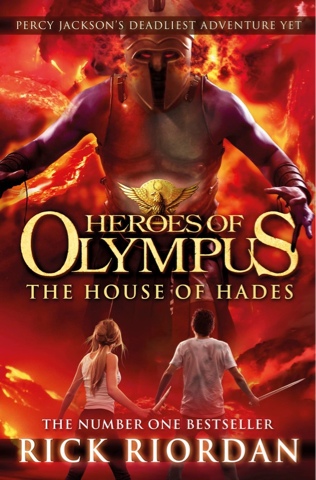 I mean really, it looks bad mainly because things don't really match. But well.
The summary's pretty awesome, too. I'm not sure if you can tell, but I'm pretty excited!

At the conclusion of The Mark of Athena, Annabeth and Percy tumble into a pit leading straight to the Underworld. The other five demigods have to put aside their grief and follow Percy’s instructions to find the mortal side of the Doors of Death. If they can fight their way through the Gaea’s forces, and Percy and Annabeth can survive the House of Hades, then the Seven will be able to seal the Doors both sides and prevent the giants from raising Gaea. But, Leo wonders, if the Doors are sealed, how will Percy and Annabeth be able to escape?

They have no choice. If the demigods don’t succeed, Gaea’s armies will never die. They have no time. In about a month, the Romans will march on Camp Half-Blood. The stakes are higher than ever in this adventure that dives into the depths of Tartarus.

PS. I'm sorry if my English is bad today. I've been working some extra hours and then I have some entrance exams next week so that's mostly what I'm focusing on.

Email ThisBlogThis!Share to TwitterShare to FacebookShare to Pinterest
Labels: heroes of olympus, interlude, rick riordan, the house of hades