To A Place Without Fear (Lover Avenged by J.R. Ward) 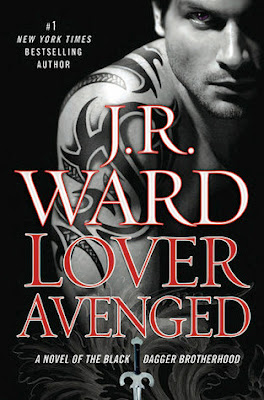 Rehvenge is used to living in the shadows and dealing with the roughest nightwalkers around - including the Black Dagger Brotherhood. His fearless reputation is why he's approached to kill the race's king, and his bad side is dying to rise to the occasion.

As his secret identity as a symphath is threatened, he turns to the only light in his ever darkening world - a female vampire untouched by corruption and and the only thing standing between him and eternal destruction.

The cover and the summary aren't my favorites. They both focus on Rehvenge only: the covers where we have the shoulder and neck combo of the main couple are better. They aren't the best by any means and even those do focus more on the males, but at least the females are in the picture.
And the summary. I think it focuses on the story from a weird angle and it, too, forgets Ehlena completely.

I have to admit, Rehvenge’s book always surprises me and not necessarily in a good way. It’s pretty obviously important for the Big Plot of the series, but it does feel like some of the events in it are just tiny pawns moved in the boring middle of a long chess game.

Also, Rehvenge? He seriously comes from behind a corner as the next main character - everyone else is a Brother or so and then we have him? What with all our earlier heroes and heroines, we’ve met them - even briefly - before, maybe a POV scene or two. With Rehvenge we’ve got that too, but he’s always been a distant character for me, somehow apart from everyone else. I think I would have liked more from his story - because his story in this book does feel a little like a basic redemption story with a happily ever after - and then we barely see him in the next books! Hate to say it, but this really feels a little like a filler book.

Elehna. I have no idea what to say about her. She gets a little (not that little) overshadowed by Rehvenge’s tragic story and what she goes through is mostly the aftermaths of other peoples’ stories or as someone’s sidekick. She’s a nurse and rather obviously it’s a part of her to want to take care of others before herself.
When I started thinking about her, I realized that she really reminds me of Mary and Doc Jane. Their overall storylines are frighteningly similar, but Elehna doesn’t have Mary’s raw toughness or Doc Jane’s cutting edge brain.
So, Elehna’s someone who cares for others and it’s what we see of her the most. She’s a good person who really tries to see the best in people and help them - but she won’t be played, she isn’t stupid or naive. She’s been kicked by life and has had to really fight to survive. But I feel like we’re a little glossed over that. It’s a little “She’s had to count her money carefully and care for others! Oh, look shiny!”
And then her relationship with the glymera reminds me of Marissa and Bella. Am I a horrible person?

Rehvenge is pretty much I think, the anti-hero. He’s selfish, cares only about those he’s chosen to care about and will play things so that he’ll come at the top. But then again, I don’t see him as completely ruthless, as he tries not to become cold-blooded and stop caring about others in a way that’ll have him hurting people just because he can. He might not care about random people, but he won’t hurt them just because - he avoids that at all costs. Well, I think he avoids people and cares about them only when he deems them worthy of his time and interesting enough.
His relationship with Elehna does reveal a softer side to him: we see the male he’d like to be and it’s interesting how he sort of fights between who he wants to be and what he is.
There’s of course, a tragic backstory and I kind of like what it reveals about him and it’s twisted and everything. But then again, some parts of it include the “women need protection” tagline of the series. The more I reread the series with a seriously critical eye, I’m losing some of that glamour it first had for me and I’m talking mostly about the world building.

They are, to be honest, really cute together. Rehvenge is a little pushy in the beginning, but I do like how he’s vulnerable in the relationship, too. He reveals more to Elehna that he’s voluntarily revealed to anyone before (his crew does not count) and I like that he completely (well, almost) lets go of his masks. And by that I really mean that of course it’s going to take something more than something simple to make him him drop all of his masks.
With Rehvenge I think Elehna finds someone to be comfortable with. Even with all the lies I feel like they’re pretty much equal in where they stand in their relationship.

I liked how we got to see Rehvenge together with his crew, if we hadn’t  gotten the small moments we did, I would have been so very disappointed. Same thing with his scenes with Bella! If those had been missing, it could have ruined the book.

This book really breaks the series in to two, the Before and the After. This book has a different style as the first six do. Ward gets a little more deeply into her own style and if the way she writes things bothered you before, the dialogue or how things are built? It’s just going to get bigger and rougher. It isn’t quite as obvious, her style getting stronger, as it is in the next books (mainly the two latest ones, LR and LatL)

And this is the point where it starts to feel like there are too many things going on and too many tiny details to keep up with. We get remotely little of the main couple, which is sad, since after all they’re rather new.
I kind of wish that Ward would just cut some things. Because yes, there are interesting things happening with other characters and what the villain is doing and what other previous main couples are doing and also future couples. But do we need so long and repeated POV scenes with them? Many of my favorite scenes are sort of extra scenes, I adore them. But in the end, when you have a lot of those scenes, the book is heavy, moves slowly and it diminishes the main couple.

Final thoughts: It is really hard to find something simple to say about Lover Avenged. The title feels a little off, there are a lot of players in this book and the main couple is more about Rehvenge and sidekick Elehna; though she is sweet, she gets sidelined. We get a closer look at Rehvenge, but is he really a main character in a series that has so many main characters that I’m not sure if I want to count so high.
With LA, Ward moves her writing onto a new level and it’s either a good thing or a very bad thing.