We Are Shining (Lover Enshrined by J.R. Ward) 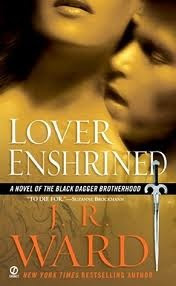 In this "frighteningly addictive" paranormal romance saga, there's a war raging between vampires and their slayers. Here are the stories of a secret band of brothers like no other - six vampire warriors, defenders of their race. And now a dutiful twin must choose between two lives...

Fiercely loyal to the Black Dagger Brotherhood, Phury has sacrificed himself for the good of the race, becoming the male responsible for keeping the Brotherhood's bloodlines alive. As Primale of the Chosen, he is obligated to father the sons and daughters who will ensure that the traditions of the race survive, and that there are warriors to fight those who want all vampires extinguished.

As his first mate, the Chosen Cormia wants to win not only his body but his heart for herself. She is drawn to the noble responsibility behind the emotionally scarred male. But Phury has never allowed himself to know pleasure or joy. As the war with the Lessening Society grows grim, tragedy looms over the Brotherhood's mansion, and Phury must decide  between duty and love...

When I started thinking that hey, I should review the Black Dagger BRotherhood - the books can be so different and I have a lot to say! - I knew, in the back of my mind, that Phury’s book was going to be a pain in the ass to write. It was.

Now, don’t start throwing tomatoes yet - I have nothing against Phury or his special storyline. His struggles with his issues are not the problem. On paper, just the idea, that you’d sacrifice everything for a twin you’ve never met and that you’ve heard countless stories of and then even after all that you’re both messed up and there’s no obvious happy ending? I adore the twins, their interactions are so bittersweet - they care so much about each other, but life’s broken them and they don’t know how to express their love but they need each other so much even though they don’t want to.
I just... reading the books before, I never really wanted to get so much inside Phury’s head - or Cormia’s. There was no excitement for me in this book.

But, partly, that is what makes it so awesome. The book is really rather bittersweet - the people here are caught up in the past and their mistakes and despite wanting to move on, something holds them back. And the hardcore emotions that Ward throws around? This is one of the most emotional books, with the whole ups-and-downs, we’re-getting-there, no-we-aren’t. YOu can taste the hope, but it’s still too far away. I do think this is a good book, written amazingly.

Phury, the sweet, handsome Phury. He dresses perfectly, his hair is perfect and family is everything to him. I think, after Darius he’s the one who first started thinking of all the BRothers (and their lovers) as family, the others needed to get over that other shit first.
But then, he’s all broken inside. For Phury, protecting others is the most important thing - especially Z -  and he quite often forgets himself on purpose when he tries to take care of them. And when he tries to care for Cormia, it becomes pretty damn obvious that he’s all disconnected with himself and just puts all the bad shit on her, too and not the good stuff. (Does that make sense?)
When you think about it, his life before Zsadist was... not as bad Z’s but he was nothing without his brother. The bond the two have, is heartbreaking, when you think how long it’s taken to build that. And with how Phury’s life has been all about Z. Z lives, Phury does.

Cormia, sweet, sweet Cormia. Personally, I just want to gather all the Chosen and feed them lots of chocolate and hiss at the Scribe Virgin. It’s interesting, how we first meet this a little scared, tame young woman and even when we see more of her, all we really get to see is that she’s gentle and caring. But then, she has this vicious independency that she can take care of herself thank you very much. She’ll even decide how she’ll be under someone’s thumb and I think what she’s afraid of is losing her self. And she’s smart for someone who has never gone through any education or learning. (Rituals and rules do not count here.)
I think she’s self-sacrificing, too, but she knows when it’s good for and when it’s not - most of the time. She’s far more calm and sensible than Phury and so when she loses control, it really shakes her to the core.
What I always sort of forget is that, when she sees something that she can do or has to be done, she’ll go and do it. “That has to be done? Well, let’s do it!” That’s basically what she says to Phury when he can’t see a way out.

They are very sweet together. But they just might work together the best out of all the couples - at least that I can think of. It would be foolish to think that even after the biggest problems have been solved, that these two would never fight. But in the end I think they have enough humility and in them to come and admit that maybe it was a stupid fight. Without weeks of no communication unlike some people.
They support each other more obviously then other couples, though their falling in love in this book is more like taking the stairs in big leaps.
I feel like these two are leaning on each other in turns and then just smiling at each other, as if to say it’s okay. They give each other freedom and will catch the other when needed. They do that both, it’s not just what Cormia or Phury does. It seems they just trust each other and enjoy the other’s company completely.

Ward could have done something really horrible with the Phury-Bella and his and Cormia’s sort-of-arranged-marriage. She skirts the line there, I think, terribly close to horrible and gross with taking it too far. Some of the scenes that Cormia and Phury have make me cringe a little, but mainly because we’re talking at that point about people who can’t think past their own problems, let alone discuss them. And that leads to shit.
But Wards maneuvers beyond that, hitting the notes of shit-people-talk-about-it-already more than gross-gross-stop. But again, trying not to spoil anything, this is my personal issues with stuff.

Besides Phury and Cormia, the other characters also have similar problems. The whole theme of the book seems to bittersweet, because most of the people are feeling blue with sweet moments thrown in. There’s almost a visible dark storm cloud hanging over this book, because dangerous stuff happens and it gets pretty bad. The plot gets one of its most darkest points started and well on its way. And then again, we have a few sweet moments though they are tightly entwined with the bad.

Lover Enshrined is the what, sixth book in the series? And to me it feels like it ends something. With the next books, we’re moving on to something else, the plots gets a little more complicated, the world is expanded on, more and more characters and their own stories are introduced.
I also think that Ward’s writing style starts changing from here on. It isn’t that obvious in the very next book or the one after that, but then when we get to Lover at Last, it’s more bold and cuts more corners. I’ll mention that later with those books’ reviews. But these first six books are to me the golden era and I re-read these the most. I think Ward is at her best here and doesn’t really match the awesomeness in whole books but in small scenes in the rest of the series. Excepting one book, which I’ll tell you when its time is here.

Final thoughts: Lover Enshrined may not be my favorite, but it is a good book in the series. It completes the first six, making them somehow a complete package. When starting to read this, you might prepare yourself for a gloomy backdrop, storm clouds above and bittersweet action.