It's Between Us (the Calling by Kelley Armstrong) 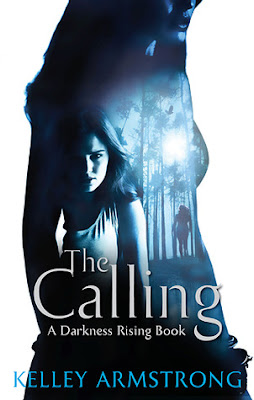 the Calling by Kelley Armstrong

Maya Delaney's paw-print birthmark is the sign of what she truly is - a skinwalker. Experiencing intense connections with the animals that roam the woods outside her home, Maya knows she will soon be able to Shift and become one of them. And she believes there may be others in her small town with surprising talents, including local bad boy Rafe, with whom she shares a powerful secret.

Now Maya and her friends have been forced to flee their homes during a forest fire they suspect was set deliberately. Stranded in the wilderness of Vancouver Island, only their extraordinary abilities can help get back home. But can Maya really trust her friends?

And can she learn how to control her dangerous gift, before it controls her?

Second book in the trilogy, starts right up from where we left off. Are you ready? I’m not sure if you are. (Overview of Darkest Powers, a trilogy companion you might want to read before this is here and this trilogy’s first book the Gathering’s review is here.)

Now, we start off immediately where we left in the Gathering. I love it when a series does that.
But remember when I said that you know, the Gathering was a little slow, it was just basically introducing things and what not. Well, all that pays off in here. We were given the introduction to things last time so that now we know the basics already and Armstrong can just drive us off the deep end and it’ll be okay. And it doesn’t even feel like bad, because the “introductions” fit with the last book, with its sort of “theme” and style and here it doesn’t feel like you’re being told the same things twice.

I didn’t really know what think about Maya when the last book ended. I mean, I liked her, but she seemed a little naive and a boring good girl. Well, in the Calling she’s in her element. This is really her time to shine: she’s smart, she knows what she’s doing and she won’t give up. It’s really clear that this girl is used to knowing what she’s doing, she will never give up as long as she can keep fighting and hell, she’ll go through stone if that means that she’ll achieve her goals. I just love this girl, how she kept a cool head even when she was close to panicking.

And while I liked Daniel and her best friends-team in the last book, oh boy, it gets better in this one. So much better. It's sweet and sad, because now they become this super-awesome team that practically saves the day (if I'm exaggerating a little) but then it's sad because they both have this package they have to work around because there isn't time. And they have lovely heart-to-heart conversations where they lean on each other. I just love their friendship a lot. I feel like they grow a lot just in this one book.

So basically Gathering was paving the way for this. I’m very disappointed with myself, that I didn’t grab this book right away when it came out. This is a faster book then the Awakening, the second book of Darkest Powers. Or so it feels.
The Calling is a little about the mystery, but it’s a little more thriller-like and you know, it focuses a lot on the characters surviving.
The danger, action and mystery that I was sort of waiting for in the last book is all this book’s made of. It never really slows down, it just hits the ground running and keeps going. But it doesn’t feel heavy or like an info-dump. This is probably because of Armstrong’s writing. She handles it really well, the small info-dumps are just realizations that the characters have. It’s so very natural.

We may have thought we got to know the characters in the last book, but this one just throws that on its head and everything changes. WE even get more into Maya’s head, as her life is thrown inside out and it’s really fascinating to read how the kids deal with the sudden change. The characters either really grow in front of your eyes or then there are some scenes that could be summed up to them taking off a mask that has another mask under it and then again later taking that off only to yet another mask. It’s fun, because you never know who to trust and while I weren’t really trusting anyone in last book, now the characters are also catching up to that. And it’s pretty painful, because you can see how all they thought was right is crumbling down and that’s not cool. Suddenly, I really care about these characters, without noticing. I really weren’t sure what think when the Gathering ended but reading this book has made me love that one so much.

Though I have to admit, that the group of characters that we mainly play with in this book, does feel a little like playing with dolls at points. I don’t really get as close to some of them, while the other characters care about and Maya takes up a lot of page space worrying them. It felt awkward when I just wanted to move on and drop the dead weight. That would have been problematic, until I remembered, while writing this, that that’s exactly the same feeling I had about two certain characters in the Awakening (Darkest Powers 2) that I in the end, care about the most.

I just couldn’t put this book down. I had to keep going. There weren’t any slow parts and even the parts where Maya spends time just trying to make sense of things or trying to figure something out, I just wanted keep reading. Now I really have to have the last one, because it just can’t end here!

Final thoughts: In some trilogies the second book isn’t that good. Well, the Calling is an action-packed, mystery and will keep you reading it until the last page. You can’t put it down. If the first book was a little blah to you, well this will fix all the bad feelings you might have had. In this book I really, really fell in love with Maya and now the next book can’t be in my hands fast enough!