Count to Ten (the Gathering by Kelley Armstrong) 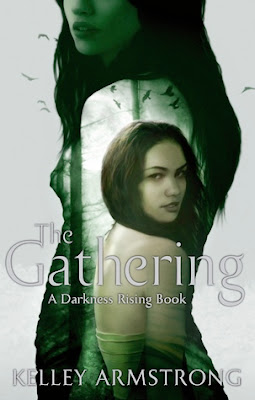 Review of
the Gathering by Kelley Armstrong

Maya Delaney has always felt a close bond with nature. The woods around her home are a much-loved sanctuary - and the pawprint birthmark on her hip feels like a sign that she belongs.

But then strange things begin to happen in the tiny medical-research town of Salmon Creek. A young girl drowns mysteriously in the middle of a calm lake. Mountain lions appear around Maya's home and won't go away. Her best friends Daniel starts experiencing bad vibes about certain people and things. One of those is Rafe - the new bad boy in town. What is he hiding - and why is he suddenly so interested in Maya... ?

The Gathering is the first book in a trilogy called Darkness Rising and it’s a companion of Darkest Powers -trilogy. It isn’t really necessary to read Darkest Powers first, but I would still suggest that. It’s such a better combination like that, because we are talking about trilogies that tell the same story with two different stories. If that made sense.

I wrote an overview of the Darkest Powers here, but since I have so many things to say about these books separately, I’ll write separate reviews of these. Plus, you know, I read that trilogy such a long time ago it’s hard to separate my thoughts for one book.

The book starts the story of Maya Delaney, who lives in a small medical-research town and that already gives you a completely different feel for the book unlike the other trilogy. Now with our book, strange things start happening, a new bad boy, a mysterious death, a curious reporter and something about Maya herself.

Now, I immediately fell in love with Chloe: my love with Maya was more of a slow-burning candle compared to that. Maya’s lived her life in a small town, where she knows everyone and trust everyone. She’s never really had a hard life in things: she’s been one of the popular kids in school and in general she likes everyone and everyone likes her. The small things she has with some people really stand out since they’re so unnatural.
Sounds boring? Don’t worry, Maya’s actually a very smart girl - in a town like this, the kids have been trained to their best abilities and Maya’s tough: she’s no pushover. As in that she’s athletic and her most stand-out feature is her love of nature, though that doesn’t quite describe it. Maya is a part of the nature, the woods surrounding the town are her territory and she’s good with animals. She may have not lived a tough life, but she does use her head. And the more obvious it becomes that there is a mystery to be solved, the more she starts thinking about the things around her.

One of my favorite things is Maya and Daniel's relationship. They've grown up together and are best friends, so they get along so well and there is the feeling that they know pretty much everything about each other. And I love how there isn't even a hint of any weird tension.  They just work so well together, behaving as a kickass team. I'm a sucker for best friend-teams and theirs is so special because there's some sadness left and while they seem perfect on the outside there are parts in which we see that they aren't.

Like in Darkest Powers, there is a wide range of characters, none of them just good or evil. Everyone settles in the uncertain grey areas of who’s on what side. And we think we know people, but we only know what they want us to know - we learn more about their motives and it becomes more clear that no one should be dismissed.
What’s curious is that I, personally, came from Darkest Powers and having learned from that to not trust anyone, the way Maya and her friends trusted people, felt weird. And it’s a curious feeling, when the main character thinks “Well, I know these people. They want what is best for me.” And you  think, “But how do you know that?” Basically, there’s a mystery here as well, but you know that when you start and the characters don’t.
It isn’t something that bothered me, but it was a very interesting perspective to read the book from and see how things unraveled. That’s mainly why I think you should read Darkest Powers first.

The Gathering starts more slowly than the first book in Darkest Powers does. There’s less of an urgency going on, but there is this feeling of quiet before the storm. The tension grows and grows and you’re kept on your toes, waiting for it blow up.

The plot, I think, is rather simple. I didn’t guess it before it happened, but it isn’t that complicated. The Gathering doesn’t get to the good parts yet and it does feel at points. We spend a little more time just getting to know the characters and their lives before, instead of things just happening. Though, I can tell you that all the “waiting” does pay off in the next book.
And even if it feels like nothing happens, there are a couple of big surprises that just blow up in your face when you least expect it.

Final thoughts: A slow beginning to the companion trilogy of Darkest Powers is promising, but the hook is small compared to the must-know-now of the Summoning. But the Gathering is absolutely charming, with Armstrong’s writing captivating your taste buds and delivering mystery-goodness. Knowing about the mystery before your characters is in my opinion so much fun.