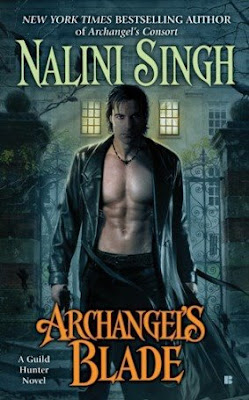 The severed head marked by a distinctive tattoo on its cheek should have been a Guild case, but dark instincts honed over hundreds of years of life compel the vampire Dmitri to take control. There is something twisted about this death, something that whispers of centuries long past - but Dmitri's need to discover the turth is nothing compared to the vicious strength of his response to the hunter assigned to decipher the tattoo.

Savaged in a brutal attack that almost killed her, Honor is nowhere near ready to come face-to-face with the seductive vampire who is an archangel's right hand and who wears his cruelty as boldly as his lethal sensuality - the same vampire who has been her secret obsession since the day she was old enough to understand the inexplicable, violent emotions he aroused in her.

As desire turns into a dangerous compulsion that might destroy them both, it becomes clear the past will not stay buried. Something is hunting... and it will not stop until it brings a blood soaked nightmare to life once more.

Let's star this review by talking about the cover of this book. I mean really? That has to be one of the worst ones I've ever seen. It's absolutely horrible when you look at the other covers in the series, this just looks half-assed. And I get that in the beginning we know Dmitri better, but couldn't we have had even a small hint of Honor?
Luckily the summary at least is good.

I was actually surprised by this book. It jumps POVs and main characters seemingly so quickly after three books of Elena and Raphael. Though that isn’t a problem at all. I think it’s a refreshing book, especially after the last one. Now when we do go back to the Elena and Raphael with Archangel’s Legion, it’ll be like seeing old friends after a long time and that’ll be just that much sweeter. Also, seeing inside Dmitri’s head this intimately? At last.

Now, before I go on, I loved this book, so very much. This is an absolutely brilliant book, with so much pain and yet tender, heartfelt moments. But it is a very difficult read. Dmitri’s a bit of an asshole, sometimes without a reason - there are no excuses given and his perspective helps things (I’m not going to lie, I like my characters a little asshole-y). And Honor’s story is also hard to read about, just because you care about the character so much that her pain is horrible to read about in detail and also because the details are not nice. But then, Singh does it beautifully.

Honor, who we meet the second we open the book, steals your heart the moment she steps on to the pages. In a way, she’s the opposite to Elena and that’s an interesting dynamic after so much of her. Honor’s a very real person: she stands out from all of the characters with this brutal sense of honesty that she has about herself. The feeling I get from her is that she stays true to herself, even if it’s a struggle sometimes.
Honor’s someone who tries her best, who feels and does everything by the fullest, even if it’s hard. She just keeps fighting. Unlike Elena, who seems to be a natural in everything, Honor’s had to fight for it. And while she’s a strong person, she isn’t someone who enjoys a fight: instead she uses her brains. She fights if she has to, but she’ll get out of it the way she can. Without Honor, Dmitri could never have carried this book by himself.

Dmitri, our old friend. I have to say, I have always adored Dmitri - he just fits that
perfect mold of an ancient vampire: lethal and with a side note of asshole. Dmitri’s certainly someone who’ll do anything to get to what he wants and hardly cares about collateral damage. But then gain, I can’t quite imagine hurting others just because he can and that’s the line of asshole that isn’t acceptable.
He does have a softer side, but it’s so buried under this warrior-image and his outer shell that he uses to protect himself. He’s so old and been through so much pain that his protective actions have become part of his personality. It’s hard to shed those, even to do it in 300 pages. And what I really like is that he just doesn’t magically become a better person. Instead those walls come down a little and he can breathe more easily again.
And with this book we see inside his head and while I don’t agree everything he does, I can understand him better. It doesn’t take away his asshole-ness but it’s easier to live with, if that makes any sense.

Their relationship starts rocky, but there seems to be this something between them immediately. Not quite a tension or immediate passion, but something in-between. They revel around each other and it becomes clear from the beginning how they act different with each other than others. And as the story progresses, you see them mold around each other. Neither changes, but it’s as if they’re dancing around each other, trying to find the correct steps so they’ll be dancing to the same rhythm and won’t step on the other.
It unravels slowly and you see it as if in slow-motion but it doesn’t distract you from the story.

There’s an absolute difference in the voice and the feel of this story and the previous three books. Elena and Raphael’s story is perhaps just a little more refined, a little more careful of the details. This book is more rough, the tension’s a lot more pressuring and things are much more sort of “closer to the ground”. We’re not in the fancy world of angels, that we’ve seen. Things aren’t really pretty and Singh isn’t trying to make them any prettier or uglier - she says it as it is and that works for the story. Thanks to that the story is so much more real and it makes you a part of it. That can be  hard on you sometimes when you’re reading the book, but all in all it pays off.

The story is heavy. I had to stop at some points just because I felt so much for the characters. And actually, the thing is that I feel like this is more of Honor’s story than it is Dmitri’s. It is his also, but have you noticed how some paranormal romance books focus a lot more on the hero instead of the heroine? J.R. Ward’s Black Dagger Brotherhood is a good example of this: it features kick-ass females, but it starts and ends with the males.
But not with this series and especially not this book. Archangel’s Blade is about Honor’s vengeance, Honor’s journey to being fully herself again. Dmitri takes strength from her to final find a peace for himself as well, but it’s Honor who’s the main character that Singh’s telling a story about. And well, sorry about this, but she truly honors the feelings of Honor and handles her delicately but doesn’t treat her as if she’s weak - because Honor is anything but.

Now, if I were to have a problem, it would perhaps be the ending, just a little. The book is filled with emotional highs and lows, so the happy ending makes you stop. Things aren’t magically fixed, by no means, but the ending is really, really final. As in checkmate-final, writing a period to a sentence. After so much of things not going the way you want them to, when they finally do go, you don’t know what to do with yourself. So in a way it’s the perfect ending, but that’s the feeling it gives me.

Final thoughts: Archangel’s Blade isn’t like its the previous books in the trilogy. It’s grittier, darker and even more personal. It get sunder your skin. It tells the story about two broken people who suddenly, by working towards separate goals but oddly together anyway, heal themselves just a little. Every problem isn’t fixed just like that, by magic, but you see the struggle and how difficult things are. Honor isn’t Elena, but she carries most of the book and Dmitri just delivers the final blow - I’m in love.