No name for this post because I kept searching for it for four hours and my head hurts. Will try again tomorrow. 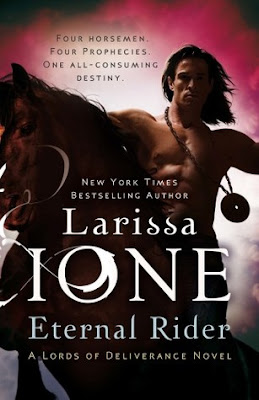 The prophecies were there but no one listened. Until now. They are the Lords of Deliverance and they have the power to usher in Doomsday.... or prevent it.

His name is Ares, and the fate of mankind rests on his powerful shoulders. If he falls to the forces of evil, the world falls too. As one of the Four Horsemen of the Apocalypse, he is far stronger than any mortal, but even he cannot fight his destiny for ever. Not when his own brother plots against him.

Yet there is one last hope. Gifted in a way other humans can't - or won't - understand, Cara Thornhart is the key to both this Horseman's safety and his doom. But involving Cara will prove treacherous, even beyond the maddening, dangerous desire that seizes them the moment they meet. For staving off eternal darkness could have a staggering cost: Cara's life.

I adore Ione’s Demonica series and I was actually going to re-read and review them first, but then these arrived so fast and I got super curious to finally read them. And I was afraid that if I read those first, that series would be too fresh on my mind and would affect my feelings about this one. So, I’ll probably mention Demonica a couple of times, but there will be a review about that by itself.

I do admit, that Demonica starts off far more strongly and it does give you a really good feeling about the series in a whole. Lords of Deliverance starts far more slowly with Eternal Rider and it does have less of a punch. But there is this deep confidence that you can feel in Ione’s writing and I really do commend her on her two series.

The main big “missing thing” in Eternal Rider is the deep bond between the siblings - which is what Demonica focuses a lot on. Eternal Rider uses much more time explaining things to you instead of showing them unlike in Demonica, where we experience the things. This is probably thanks to Ares, who isn’t that awesome of a narrator: he’s very clinical and straightforward. It does keep up with his character and does help in figuring out who he is, but it doesn’t make him a nice narrator in the beginning. Then, when we get to know him and as he gets to know Cara, he relaxes a bit more and that a little easier on the reader.
And okay, the siblings do have a strong relationship, but Ares is pretty cool about everything.

Now, our main lady Cara, who is just the sweetest thing ever. No, really. She started off rather scared for the first half of the book and yet, she kicked ass. No really, she was scared but she wanted to find a solution and fix it. I think Cara is a person who carries her emotions on her sleeve, but she’s got a spine of steel. And that is exactly what makes her a really interesting match with Ares, who’s all cool and practical, warrior-strategy, when she’s throwing emotions around but like I said, she kicks back.
I think her well, trying not to spoil it, so let’s call it “abilities” fall in to a pretty cliché category and with her charm-all the animals thing, but Ione handles it pretty well, so that it doesn’t become boring.
And Cara is such a better narrator than Ares! She’s the absolute balancing force for him, I love it so much. And I think, out of the two of them, Ares needs Cara more than she needs him. Ares only gives her that first push to her being confident in her “abilities”. But she’s the one who gives him peace, who makes everything worth-while to him.

Ares, the first Horseman, who would be war. He can be described with one word and that’s warrior. He’s the warrior: all about strategy, keeping yourself unattached and just straight to business. He doesn’t really like emotions, but it isn’t like “Ew, emotions they have cooties”, but more like he doesn’t know how to handle them - they seem to honestly confuse him. And he’s been raised to be the strong one who can handle everything. Emotions were weakness to him.
And while his narration and point of view is difficult to stomach in the beginning, once you really crack that outer shell, you see the reasons behind everything and it all clears up. He’s such a smart man, used to living the way he does: alone. But then he cares for his servants, who really aren’t servants but his family, though he just calls them servants because the word family scares him. He’s just so adorable, getting all confused when Cara makes him feel and then just becoming putty in her hands. And he admits it.

The relationship with Ares and Cara was so, so very rough and well, difficult to read in the beginning. There was the obvious tension between them and the obvious attraction, but they were both sort of un-sure around each other and suspecting the other. And while I did not like that at all and had a really hard time reading it, something happens that makes them see each other in a new light and changes their relationship: the way they treat each other. There still remains that uncertainty, but the feelings turn softer and caring. Combined with how they were when they met, I actually ended up liking it - when their relationship changed in front of my eyes, I cheered. Ione proved herself right away, though I doubted her. She handled it brilliantly; two strangers being attracted to each other in a bad situation and then starting to actually care for the person. It was beautiful.

Eternal Rider is the first in the series and because of that, it’s a little introduction-filled. The action isn’t quite big and explosive as you might expect from a book telling the story of the Horsemen, but it does sped up towards the end. And really, the book seems to relax and get more comfortable in its shoes towards the end. The jokes get more frequent and some old favorites from UG pop up.

And let me tell you, how brilliantly Ione handles the UG cameos. They start with a small name-drop or a tiny hello, but they’re obviously not the main thing here. The Horsemen and the Apocalypse are still the main focus. And then we see more of our old friends, only to get right back to the new series’ cast. It’s done so wonderfully, not breaking the pace of the story of confusing you from the main theme.

On that note, let’s take a moment to appreciate (and fangirl over) Ione’s writing in this book (and who we’re kidding in all her books). She manages to balance smart, tight writing with a bit of modern slang terms. She doesn’t over-do it, like I’ve noticed some writers do when they try to write like people speak these days. But no, she handles her descriptions tightly and efficiently and then she practically dances off to some good jokes and modern terms. And it all fits together so perfectly. Adore it so much!

Final thoughts: By now it’s pretty much settles that I adore Ione’s style of writing and will keep drooling on her books. Eternal Rider is a decent, if a bit slow starting, beginning to a new series that I think will deliver some mean punches.