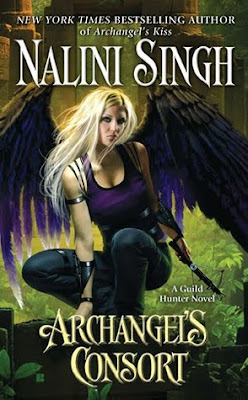 Vampire hunter Elena Deveraux and her lover, the lethally beautiful Raphael, have returned home to New York only to face an uncompromising new evil...

A vampire has attacked a girls' school - the assault one of sheer vicious madness - and it is only the first act. Rampant bloodlust takes vampire after vampire, threatening to make the streets run with blood. Then Raphael himself begins to show signs of an uncontrolled rage, as inexplicable storms darken the city skyline and the earth itself shudders.

The omens are suddenly terrifyingly clear.

An ancient and malevolent immortal is rising. The violent winds whisper her name: Caliane. She has returned to reclaim her son, Raphael. Only one thing stands in her way: Elena, the consort who must be destroyed...

I think that by now my reviews concerning this series should come with a warning: Beware the Fangirling. So, consider yourself warned.

The last time I felt like this reading a series was with A)the Black Dagger Brotherhood by J.R. Ward and B)Daemonica series by Larissa Ione. I think that those are my top three paranormal romance series, with either Ione’s or this one as number one. (Can’t choose which one.)

By now, we know our characters, we know our world. But still Singh keeps pulling these intricate details from somewhere, and yet each and everyone one of them fits like a glove. It doesn’t fee like you’re being stuffed too full or like a continuity error that the author has just glossed over. Instead it’s as if she’s peeling back layers on a very intricate, detailed world that still remains hidden from us (spoiler: I’ve read all five in the series so far, so this concerns them all).  It’s just really wicked to pick up a book and get in to it with this feeling of “What is she going to reveal this time?”

The back summary tells of something weird going on in the world and that it affects even Raphael. And still, this one time, the main events of the story felt a little lame - but only because the emotional things that Elena was going through were so much the focus of the story. We’re much deeper in her head than before, I feel and we see her and Raphael get very comfortable and cosy together. It warms my heartstrings.
Though, some of the main events of the story felt a little like strings that were neatly tied and tangled in the web, but that had gotten a little frayed at the some points. They were explained away a tad too quickly or not touched upon as strongly as I had come to expect from the series. It didn’t bother me with the whole reading experience, but thinking back, I can see that the book suffers a little of the “too many villains in one story” -syndrome. Still, Singh delivers beautifully where another author could have stumbled.

By no means am I saying this is a bad book, I’m just saying that the previous ones had a bigger mystery and more tension. In this, the bad guys are revealed pretty easily and you just wait out the hows and whys. It’s not bad but comparing it to the others you can see a shift in the tension and story.
All in all, the book feels much more calmer. Though the bad guys are threatening, we’re not that much in a hurry. We can just relax and sit back and enjoy the ride.

In fact, that point about “what is she going to reveal this time” is exceptionally on point when it comes to this book. This book may not have the same high tension mystery that the previous ones had, but instead we really dig deep into our characters. We’ve pretty much revealed details about Raphael and Elena’s past, but in this one we face them alongside the characters as thing re-surface. It’s a spine-tingling thing to read and I love how many tiny things Singh’s managed to make magical without being too much information that could get boring.

Raphael remained a strong presence, but while we did get to see slightly softer side to him and got definitely even more relaxed with him, he wasn’t as much of a player in this one. Perhaps because we’re so comfortable with him now that we don’t even question it. In the first and second book it was a little like we didn’t quite know where he stood, but in this one we - and Elena, too - know where his heart stands.

Part of the reason why Raphael isn’t as “big” is because we’re so deep inside Elena’s head. That’s the feeling I had on top of everything when reading this book and the feeling that I was left with when I’d finished. And because Elena is such a delightful character, that isn’t a problem at all. I really think that even with the archangels and vampires and whatnots, she’s the glue that keeps things together. Point of views may branch out and we’ll see new characters and face new things, but it’ll always come back to Elena. It’s not cliché, it’s not boring, because Elena really carries the series on very capable shoulders. And well, one could argue that it’s actually Singh and her talents that carry the series, but even then, the series is in very capable hands.

Final thoughts: Singh has everything so perfectly under control and she just keeps delivering with her perfect sentences and absolutely perfect storytelling. The pacing is spot on, the characters remain strong and keep getting more comfortable in their shoes so that we see more and more sides to them. This third book has cemented my love for this series for the rest of eternity.
Posted by Joa at 10:31 PM