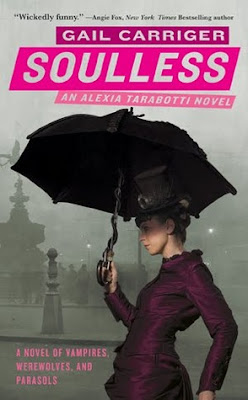 A review of
Soulless by Gail Carriger

Alexia Tabarotti is laboring under a great many social tribulations.

First, she has no soul. Second, she's a spinster whose father is both Italian and dead. Third, she was rudely attacked by a vampire, breaking al standards of social etiquette.

Where to go from there? From bad to worse apparently, for Alexia accidentally kills the vampire - and then the appalling Lord Maccon (loud, messy, gorgeous, and werewolf) is sent by Queen Victoria to investigate.

With unexpected vampires appearing and expected vampires disappearing, everyone seems to believe Alexia is responsible. Can she figure out what is actually happening to London's high society? Will her soulless ability to negate supernatural powers prove useful or just plain embarrassing?

Finally, who is the real enemy, and do they have treacle tart?

If you’ve been hanging around blogs that blog about adult paranormal/supernatural/something-whatsitcalled books, you’ve probably heard about Carriger’s excellent book and its followers. As you should have, because oh boy, is it amazing, yes it is.

The plot of Soulless basically goes like this: evil goes do stuff, but our heroes don’t know quite what yet - they’re baffled by events that will be all puzzled out in the end. Meanwhile, all these strange events seem to happen around our heroine and even when it is least likely, she seems involved somehow. As things are investigated, we get a look at how deliciously attracted our main lady and main gentleman are to each other and still so stupid about it. Adventure happens, some romancing and things get solved in the end!
Sound like a book, you’ve read before? Well, Soulless is nothing like that. The basic plot and idea sounds like all the books I’ve ever read - almost - but there’s just something that Carriger does that twists things so that it’s completely new and absolutely deliciously. Basically, if you’re bored of all books seeming the same and want a no-nonsense lady in your book with quick wit, I urge you to grab Soulless.

Alexia Tarabotti is introduced to us as a spinster and beyond that, as a completely inconvenient lady - she speaks her mind, has a quick with about her that she uses with pleasure and isn’t afraid to do something herself, if needed be. Alexia’s point of view gives us the most peculiar and delicious view of happenings - she catches onto things really fast and really sees things her way. She’s read all her dead father’s book and shies away from almost nothing. And yet, she’s got this near innocence about her, when faced with some certain things. I think it’s quite nicely handled, as she comes off as someone who’s strong-willed, knows a lot about the world, but hasn’t really fought that many battles - and after all, this is an alternative universe of the Victorian times (I think that’s it.)

Now, the main gentleman, Lord Conall Maccon almost falls into the trope of a surly, brooding gentleman, who will protect their ladylove a little too passionately (read: make all the decisions for her, while trying to protect her) and has very little conversational skills. Luckily, I think Carriger evades this with the talent she has. While Lord Maccon, an Alpha werewolf of the London pack, really needs to re-learn some manners, he can almost match up to Alexia’s wit and is a really good at his job - as far as we can tell. While he doesn’t quite know how to go about some things, he’s a quick thinker and apparently quite the ferocious fighter. And I do like how Alexia seems to make him stumble and that he does the same to her. And, it does have to pointed out that he does try his best, he just sometimes forgets some things? Well, while he might try to forcefully protect Alexia, she’s quick to stop him and he does acknowledge that she’s not useless.

Carriger’s writing makes me want to build a shrine to it and worship it as if her books are the only ones I’ve ever read. There are a lot of good books out there and still this one stands out. Carriger seems to write constantly with this tiny twinkle in her eye, but still not losing this serious tone to some of her scenes. Some scenes are very lighthearted indeed, but then there are some really serious parts where our heroes are in danger and yet she keeps writing with the same twinkle. And that doesn’t cheapen anything, it just makes this book stand out from the rest.
The very language is partly what you’d expect from the time period but it’s not difficult to read, as some books are on occasion to a non-native English speaker, like me. No, Soulless has some fast moments and slower moments and yet the book is so very easy to read. It just flies by and you’re left wondering, wait, did I just read three hundred pages in such a little time? Where’s the next one?

And the world is so glorious. I love a book world, where the supernatural is already a part of it as we’re introduced to things. Of course it’s interesting to see and explore the idea of normal humans meeting the strange and supernatural, but in the end, if I have to choose, I’ll rather choose this. Because it’s not like there aren’t going to be problems and Soulless does touch on that. Of course there’s going to be some problems between normal humans and supernaturals, but I so much rather like it when the supernatural is already a part of the system.

Anyway, Carriger has created a good system. Not only does she manage the this-is-set-in-a-past-time-period, she handles also the supernatural society and she unites everything seamlessly. There’s nothing about how things work that made me go “Huh?” And that does happen sometimes, when world building is so big and complicated and there is a certain etiquette to this book’s. But we get a good view of things thanks to Alexia and while some things go beyond her, we might understand them and even if we don’t it doesn’t stop you from enjoying something.

Final thoughts: Absolutely amazing book and I cannot wait to start the next one. This one ends rather calmly, but the hook that the characters have on you should be strong enough to get you to read the rest. I just love everything about the book and while I rarely reread books, this one I always go to when I need a good book.