How Did You Find Me? (Lover Unbound by J.R. Ward) 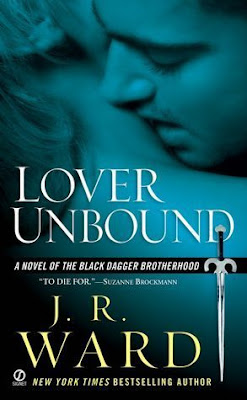 In Caldwell, New York, war rages between vampires and their slayers. There exists a secret band of brothers - six vampire warriors, defenders of their race. Now the cold heart of a cunning predator will be warmed against its will...

Ruthless and brilliant, Vishous, son of the Bloodletter, possesses a destructive curse and a frightening ability to see the future. As a pretrans growing up in his father's war camp, he was tormented and abused. As a member of the Brotherhood, he has no interest in love or emotion, only the battle with the Lessening Society.

But when a mortal injury puts him in the care of a human surgeon, Dr. Jane Whitcomb compels him to reveal his inner pain and taste true pleasure for the first time  - until a destiny he didn't choose takes him into a future that cannot include her...

This is not one of my favorite books in the series. I have neutral feelings towards it, if we’re not counting the set up for the pairing, so I knew I was going to have a hard time reading this.

The set up of Vishous and Jane is pretty much this: it’s fate! But how they meet is the part that I have problems with: basically they meet through an accident and then (slightly spoilery) V thinks it’s a good idea to kidnap Jane and take her back home with them. Enter me facepalming. I just don’t understand why romance stories choose to do this kind of a thing. I mean, yes, it forces these two spend all their time together, but ugh.

Jane is an excellent doctor, who does everything she can to save her patients. She’s tough as in will-not-back-down-from-a-challenge and will do everything that she thinks is right. She’s got a shitty parents-situation going on, but while she’s a little bitter, she’s basically moving on from that and isn’t going to let that rule her whole life. Points for that.
Though the book or the pairing isn’t really one of my favorites, Jane is. Though she really steps back out of the limelight for Vishous’ story, she stands firm in her own beliefs and knows exactly who she is. Her brain, her smartness and obvious talent in being a doctor are the things that she lives by. She’s also got a fondness for those she cares about and a softness that she keeps rather hidden, though it’s obvious that she cares fiercely. I just love how iron-willed and steady on her feet she seems and then there’s also a fiercely gentle and caring side to her that we see in parts.

Vishous, as we know, is the tattooed smart-guy out of the Brothers. I do like him, but it seems there’s almost nothing he can’t do - though he does have a lot of package to go with it.
He starts the book a feeling shitty and sorry for himself and it gets worse from there. He’s really intelligent and used to relying only on his own talents. He’s only ever gotten close to is Butch, so cue problems in this book! (And future.)
Our hero does not show emotions big time, but prefers to keep them locked away. Probably because of his past, which also takes us to his hobby, the apartment where he keeps all his BDSM stuff. Though I have nothing against stuff like that, when we see it, it at some points feels a little like fetishising.
What sometimes makes him really likeable is how caring he actually is, though it’s not in a obvious way. He has serious issues with his emotions, not denying, but he actually cares about the people around him. Not in a Butch- or Jane-way, but he isn’t an asshole, who goes around hurting people. He’ll push others away, but he won’t go out of his way to hurt them.

Like I mentioned before, I do not care about their relationship’s beginning or actually, middle either. The obvious attraction aside, I’m finding it a little hard to find why these two actually fall in love. The conversations are good, though, both getting to the point quickly and poking at each other’s painful bits. So maybe by revealing painful truths to each other and then matching that intelligence, there is something there.
I do have to admit, that though at points these two very smart people are being very stupid, they have good points. They seem to have a place of trust and it does feel like they share something deep. I’d just like more actual evidence of that and not just the feeling.

By the fifth book, we’re already in Big Plot territory and well, I really don’t care for some of the things that this one particular plot brings around. I love the world and its details that Ward’s created and they just keep getting bigger, but some parts of it just don’t taste good to me. And I don’t really like the way Ward has a way of sometimes introducing something and then just having her characters forget it until it’s mentioned later on in one sentence.

I think I liked the previous book so much that when I compare reading these two books, this one is almost underwhelming. I mean I like this book. I love it when all the Brothers work together and when Butch gets a little protective over Vishous. I love the continuing sidestory of John Matthew and learning how he grows and becomes friends with Qhuinn and Blaylock and their adventures are my favorites. But I feel like I was personally looking forward to some high point that never came - for me. While this one is a good book in the series, it’s not my favorite and yet it’s not one of the “bad ones”.

This review seems to be a bit of a downer and I apologize for that. If you’ve liked the story so far, don’t feel afraid to take a chance with this one just because of my weirdness. If you’ve read this far in the series and nothing seems to interest you, I don’t think you should keep reading - there must be other books you could be reading. Unless you want the specific story of a certain character, then you could just go for that book, if you don’t mind missing a thing or two.

Final thoughts: By the fifth book of her BDB series, Ward has pretty much established her world and characters and keeps on going with her usual talent. While this certain pairing’s story and the storyline that’s introduced in this book, aren’t my favorite, Ward delivers a good story and keeps it together even with a lot of things going on.