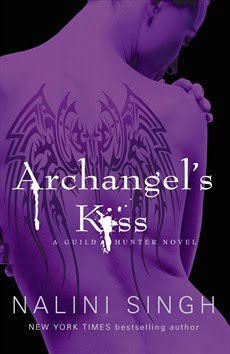 Welcome to a dark new world where lethal, beautiful archangels hold sway over mortals and immortals both, with the Guild Hunters caught in between, tasked with retrieving those vampires who break their contracts with their angelic masters.

Elena Deveraux is a Guild Hunter. She was hired to do the impossible - to hunt down a rogue Archangel - and she succeeded where none had believed she could. But in the process, she fell in love. And not just with anyone: with Archangel Raphael. It's a love that's as powerful and entrancing as it's terrifying, and dangerous.

But the world won't stand still while Elena and Raphael enjoy their new-found love. Vampires and angels go rogue, and it's still Elena's job to hunt them down and return them to their angelic masters. For all that she is exceptional, Elena isn't invulnerable - and the more obvious her talents become, the bigger a target she could find herself....

(Yet another case of who wrote the summary and did they even read the book. There's just something weird about that summary above.)

Are you ready for some fangirling? Because that’s what this review might all be about. I’ve read this book now for about five times - in a row - so as someone who rarely re-reads books, that might already tell you how awesome it is.

Now, the book begins nearly right where the last one left off and I was extremely pleased to see how it moved from there. Firstly, not all the problems where solved magically. I felt like the continuing problems all in all and the difficulties in the relationship of Elena and Raphael, are what made the story worth reading. Hell, what makes the series worth reading.
I seriously can’t tell you how much I like the fact that things don’t just get magically solved and swept under the rug.

In the last book, Elena and Raphael only just fell for each other. There was very little conversation about it and even in this book it’s handled as “We love each other, it just happened, oops.” I kinda like the idea of it being a surprise to the both of them, but it’s still maybe a little too much a little too fast, when you consider how long they’d known each other and how little they had good moments. Well, luckily, they admit they might not be equal and they fight about it. They get to know each other, they dance around insecurities and reveal secrets to each other. That just blew me away. It’s obvious how they both want the relationship to work and they work for it. They have conversations about things and even if they go two steps back, they keep working together.

And that’s how, I think, it really shows that they love each other. Raphael has a serious power-advantage and still he keeps trying to see Elena’s perspective, even if he’s made clear that he doesn’t quite agree. They keep trying and they develop this trust in each other, that even though they’re not equals in power, they’ll still stand by each other against dangers and catch the other if they fall.

Before, these two characters were a little bit like strangers to us. We were given glimpses to bigger pictures and then moved on. I think Singh’s done that nicely - if you already know the details of something, you’ll only gloss over it in your head. And that’s what it feels like the last book was like and now, as these two characters get to know each other, they also allow us to get to know them.

Last time Raphael was more distant, but now we get to know him that much better and it’s easier to understand and like him. He really grows and while he changes a little thanks to Elena, it’s not this change from him to Prince Charming.
And similarly, Elena grows, too. In AK, it becomes more clear that she has trust issues and how strongly she cares about the people she chooses to call her family. And it’s interesting to see how she handles the big threats of archangels. She at the same time relaxes and gets more sure in her own footing.

While I was reading the book, I kept checking the page count. It’s really hard to believe it’s only a little over three hundred pages. It feels like it’s five hundred! There’s so much happening, things that are revealed and how the plots moves... It’s like roller coaster, with slower bits that don’t make it feel like it’s frantic, a race to the ending. But neither is it slow, with lots of info-dumps. It keeps you invested until very last page and then you’re left wondering why there are no more pages.

Well, having said that, I do have to mention that the last three scenes or so, do feel a little like they were cut for time. They stop and begin maybe a little awkwardly compared to the rest of the book. I feel like it was done on purpose, to make it stand out and to give the book the perfect ending and the next one the perfect beginning. But it’s still very abrupt, like the roller coaster just came out of a curve and then stopped, almost giving you a whiplash.

With the last book I was pretty sure I’d fallen in love with Singh’s talent and writing, but with this it just became painfully obvious. Her other series doesn’t really sound as captivating as this one did, but when she writes this good, I’m going to have to give it a try.

Final thoughts: If you’re at all unsure after the last book if you’d like to continue reading, picking this up is worth the try. We get a better picture of the world, all the characters and well, the storyline gets bigger and better. The hero and heroine really steal the show this time and by the time the book’s finished there’s a good chance that you’re hooked on Singh’s writing.
Posted by Joa at 8:34 PM