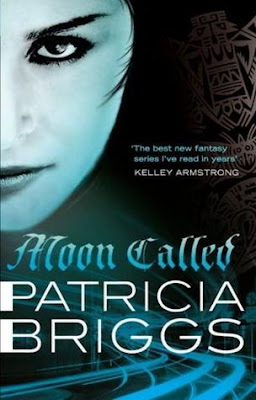 Mercy Thompson's life is a long way from normal. Her next-door neighbor is an alpha werewolf. Her former boss is a gremlin. And she'd fixing a VW bus for a vampire. But then, Mercy isn't exactly normal herself.

So when a teenager walks into her garage looking for work, the coyote shapeshifter in her spots the werewolf in him. Although he's not from the local pack, she gives him a chance and a job. But all too soon, men and werewolves come looking for him, the local alpha is attacked in his own home and a dead body is left as a warning on Mercy's own front porch. She's suddenly in a heap of trouble - and finding difficult questions breed dangerous answers.

(I apologize if this feels rushed. The Hobbit live event got me sidetracked when I was editing and then I ended up re-writing half of this. But this gets the feeling across, I hope!)

I can’t remember why I picked up this book, but I am so glad that I did! It actually reminds me a little bit of the Sookie Stackhouse series and while I hate to compare books, I do sort of feel like this is the better, slighter older sister to that one.

Mercy Thompson is our kickass hero this time around and seriously, it’s yet another addition to the list of awesome kickass ladies. She lives a simple life and is pretty much used to taking care of herself.  She’s not the obvious, let’s rush in and kick ass -kind of a lady. She mainly goes by her gut and experience in life - they’re the parts of her that make her seem tough. Mercy can handle herself, even though she’s not the strongest lady around. She knows when she needs help and it’s interesting to see how well she knows just what she can and can’t do. It’s obvious that she knows exactly where she stands and that she’s comfortable with her slightly simple life.

The story starts off simple and spirals into bigger circles as more characters and twists are introduced. There’s a lot information introduced at times and I do remember thinking it felt a little info-dump-like, but Briggs does muscle through them beautifully. It doesn’t slow the book down, but as we’re in Mercy’s head and she’s going through some stuff it feels a little... much. There’s obviously a lot of delicious backstory that gets revealed rather slowly but it just makes it better.

There are parts where the characters - and Mercy in her head - are trying to solve the mystery and here I think, is where Briggs really shines. She really brings it to the page how the Mercy and the others are going what, where, why and then trying to solve the clues they have. It really felt like you were solving it with them. They were so my favorite parts and though things seem simple and solved, Briggs throws a curve. Then it repeats. I love it how she basically lays everything on the table and then suddenly adds more when you least expect it.

She also handled marvelously all the supernatural elements - they were very easy to follow and flowed flawlessly. The story didn’t need to stop for something to make sense - the supernatural aspects of the story did and didn’t feel like they were part of the info-dump-ness. It’s hard to explain, as some infos about the supernatural world or its characters sometimes were just a lot. And then again, when something supernatural was happening, the description concerning that was handled beautifully. I might have just confused you a lot and I apologize.
Basically, everything is pretty straightforward in this world. Except then some things are not, but then there wouldn’t be anything to read about now.

Briggs adds lovely details to all her characters. Some just walk into a scene only to walk back out again, but the details in all those scenes and the details that we get from them. It’s not just Mercy, who catches on to quite some things thanks to her experience in life. But the narrative itself doesn’t dismiss any of the side characters, no matter how insignificant they might seem.

I just adore how Briggs writes descriptions in this through Mercy’s eyes and because of that the narrative does focus a little on the characters that she really cares about. Even the villains get a surprisingly detailed look at them and it really give you the feeling that when you’re reading the book, you’re actually looking in via a small window.
Briggs also handles the actions scenes well, I just enjoyed so reading those.

Moon Called does feel a little like it’s just Briggs starting up her engine. The story of Mercy is just beginning and the ending makes it feel like there’s a whole lot to come. It doesn’t quite hook you like  some books do, but it does end in a place that made me go “Then what happens?” In regards to reading the next book, that probably depends on how much you liked Mercy. It seems like the series is just going to focus on stuff and things that happen in Mercy’s life and maybe not necessarily some big grand plot.

Final thoughts: Mercy Thompson is the hero of her story and though she needs the help of strong men, she’s tough. What may seem at the beginning like a simple story, becomes a big weave of mystery. It’s heartfelt and draws you in pretty quickly. The ending is somewhat tamed down, but leaves a nice opening for the next one.