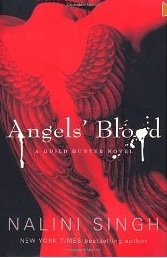 Vampire hunter Elena Deveraux knows she's the best - but she doesn't know is she's good enough for this job. Hired by the dangerously beautiful Archangel Raphael, a being so lethal that no mortal wants his attention, only one thins is clear - failure is not an option.. even if the task she's been set is impossible.

Because this time it's not a wayward vamp she has to track. It's an archangel gone bad.

The job will put Elena in the midst of a killing spree like no other... and pull her to the razor's edge of passion. Even if the hunt doesn't destroy her, succumbing to Raphael's seductive touch just may. Because when archangels play, mortals break...

(Note: This hasn’t been edited. I felt so bad for not updating last week, that I just decided to upload this. So the review is mostly all about the feels and none about the grammar. Or logic. Or coherency. Might come back to edit it, but that will be mainly grammar-y stuff.)

There are some books that are just really hard to write about. This one is one of them.

Now, I adore this book. There are several, many very detailed reasons that I could fangirl for a month about, but which I have shortened below. But then, there are some parts in this book that just made me go either “Really?” or “Just no.” So I have been wrestling with that while writing this.

Worth pointing out it also the fact that this book is one of those that made me go "Why did I wait so long  to read this? Stupid me." Once again the reason for that was the rather unexciting summary in the back. If you are in any way curious, like the genre or something, definitely worth giving it a try! I always love it when a supernatural creature is given a new twist (but if you take fangs away from my vampires we're going to have words), so I was really, really curious about how Singh would handle angels. Have to say that I love it how she writes them! There is very little religion-y stuff, which makes me go yay and they fit her world perfectly. That's all I know what to say without spoiling something.

One of the reasons that this book is made of awesome is the main lady Elena. We get so perfectly in to her head and we see the world as if we’re watching a movie. Everything that Elena sees (and well, thinks is important enough for her attention) we see in perfect detail and yet not in a too-much-description-way. Of course, part of this is thanks to Singh’s incredible talent for detail in emotion plus action, but Elena is the star of this book.
Sometimes, when you have a kickass hero(ine), her badassery seems to be the only thing that she is. Elena is badass, but that’s because who she is, what she’s been through. And we get a slow glimpse of all that she is the moment we get to know her and then, the actual Elena is slowly revealed and it is delicious. While Elena is deliciously good at kicking ass, she’s got these tiny details about just going around that make her jump off the page and I especially loved seeing how she could be equal parts fierce and then caring.

When we meet Raphael, he almost appears to be the bad guy. He’s strong, uncaring and unapologetic about it. He’s the one in charge and you better agree or else. Part of Elena’s relationship with him is him hunting her down and not caring much about her person. And it’s weird because when we see glimpses of his head, he seems intriguing, (deadly) smart and not so uncaring as one would think. The fact that Elena starts out really afraid of him, made me not like him in the beginning. But there are points where we see some hope that he’s not the bad guy.

Elena and Raphael probably have one of the worst starts to a relationship. Seriously, he almost makes her pee her pants and then he begins a manhunt for her and it doesn’t matter who gets hurt on the way. I was so in love with Elena and really curious about the mystery, that it was the only part that kept me reading. Well, Singh’s awesome writing as well, but until about half-way through the book I cared so very little for the actual romance. It picked up from there, getting some good parts that made me warm up to it.

The plot is amazing. Absolutely amazing. Singh does this slow reveal, where we get small glues as to what the bigger picture is, but it’s revealed slowly. In part, you can guess the plot as we see these glimpses of what the bad guy is doing, but the actual big reveal - what to me felt like the big reveal that Raphael and co. were hiding - is, well, shocking.
The end is sort of a true-love-saves-all end, but only partly. The true love in this one doesn’t fix anything. When we get out last look at Elena and Raphael, not everything is okay for them, they have no magical happy ever after waiting for them. And I like that though there was the element of true love is  the exception to all rules, there were still some things that weren’t solved. And  neither of our main characters actually greatly changed because of said true love - sometimes, the brooding hero all of a sudden becomes this loving gentleman, versus the brooding man who ate with his hands, but though Raphael maybe softened towards Elena a little - because of his feelings - he still remained the seemingly uncaring, deadly smart and strong guy. With a little bit of added heart.

The world of this book is awe-inspiring. It’s part what makes the book so good - and Singh’s writing. There are many details thrown at you, though actually not that much is said about how things are handled, but Singh delivers them in a way that doesn’t stall the story or the leader. There is very little confusion and the parts that did confuse me felt deliberate, like a character was on purpose not telling something, but that didn’t stop the story from moving on. And even then, the confusion would be cleared. When the book’s ending came around, almost all the puzzle pieces had been collected. Though, the ending is vague enough to make me itch for the next one.

The world wouldn’t be complete without an amazing cast of other character, from vampires, angels to hunters - with little details Singh introduces every character that Elena passes and we know everything important. Well, not everything everything, but everything that gives us a clear picture of what this person seems like, the way they speak and move and then a glimpse of the actual person who may be hiding underneath - there are some delicious hints about Raphael’s people and I’d really like to know all about them.

Final thoughts: Definitely one of the best paranormal romance books that I’ve ever read, I think I actually would rate this higher than Black Dagger Brotherhood, but I’ll say more about that once I’ve read all the books in the series. The romance started as blah and I’ve definitely read steamier ones - the physical part wasn’t that exciting, in case you’re wondering - but the details, emotion and action that Singh delivers work out all the kinks. The plot is delicious with surprises and mystery and the characters fully corporeal-feeling. Elena is the kickass star of the book and I can’t wait to get my hands on the next one.