Interludes are back! Yay! There will be another post on Sunday,  because I'm not counting these interlude-y posts.

So, Clockwork Princess by Cassandra Clare, the last in the Infernal Devices trilogy, arrived on Thursday. I was super excited about this, because it's always nerve-wrecking to wait for a package to arrive in the post. Also, because I wanted to fondle the prettiness. 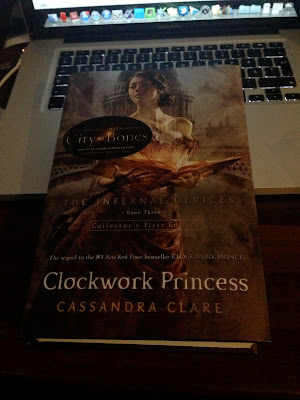 And it is very pretty. Will probably try and get that movie sticker off - it's blocking my view of Tessa and that is not cool.

I've read about three hundred pages and will probably finish it early tomorrow. I have conflicting feelings. Mainly, because hell yeah do I wanna know how it ends and all the mysteries solved! But then again, there's that dratted love triangle. I was going to write a post about the end of this series but when I started writing it mainly became a capslock whine-fest about how a certain blogger happens to... hate love triangles. (Please no rotten tomatoes.) Lately love triangles have become something that I hate with a passion. Though I am always willing to be proven wrong.

But the point of this post was to tell anyone reading this blog that you won't have to worry about spoilers about the series' end. There'll be no CP2 reaction post or review. I think there are enough of those on the web. At most I think I'll write a series overview - like the one I did about Black Dagger Brotherhood. And that I'll keep spoiler free.

Speaking of BDB, the next one, Lover at Last is coming out March 26th and that I am so excited about! Not just because of the couple, that happens to be a favorite of mine, but because I expect lots of plot and drama! J.R. Ward has started her video countdown and the quotes have been coming in for some time now and I am extremely curious about the book. I have no idea where it'll go, so it's going to be an interesting read.

Also, I've been stressing this whole March pretty badly - the reason why I missed  that one week - so it's super nice to get to relax for a week and read these books that I've been waiting to read for so long.

PS. The paper that wraps around the book, the one that holds the family tree on the turn side - I had to take it off but I didn't want to risk seeing it. So naturally I did it with my eyes closed and hid it away in my bookshelf.
Posted by Joa at 11:13 PM