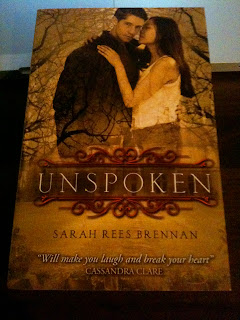 A flash review of
Unspoken by Sarah Rees Brennan

I have come up with a new thingie! A flash review! Meaning, a short and quick review usually about a book that has been reviewed to death. I meant to stay around 500 words, but apparently I have too many feels.

Kami Glass loves someone she’s never met . . . a boy she’s talked to in her head ever since she was born. Having an imaginary friend has made fitting in hard -but that's never bothered Kami.  She has a best friend, runs the school newspaper, and is only occasionally caught talking to herself. Her life is just the way she likes it.

But all that changes when the mysterious Lynburns return to Kami's village, along with teenagers, Jared and Ash, one of whom is eerily familiar to Kami...

As life as she knows it begins to unravel, Kami is determined to get to the bottom of every mystery. Who is responsible for the bloody deed in the depths of the woods? What is her own mother hiding? And now that her imaginary friend has become a real boy, does she still love him?

I'm sorry about the picture. It has to be the very crappy picture I took of my copy back when it arrived. Apparently good quality pictures of Unspoken are too awesome for Blogger.
Actually, there seems to be just something too awesome about this for Blogger, it keeps looking weird... I apologize for that.

In the month or so after its release, I feel like almost everyone and their mother has been reviewing Unspoken by the awesome and vastly talented Sarah Rees Brennan.

And hell, it is no wonder. Unspoken is amazing: I don’t think I’ve ever read a book like it. I had some doubts when it arrived - I was worried it might be shadowed by my love for Demon’s Lexicon or that Rees Brennan wouldn’t be able to deliver her magic again. Well, I was worried for nothing.
While you definitely recognize Rees Brennan’s writing, there’s a different feeling to Unspoken and it moves differently than Demon’s Lexicon. Which is a good thing, even though it might sound scary.

What Rees Brennan really does well, is deliver humor while not letting go of this atmosphere of mystery and something just lurking over the readers’ and the book’s characters’ heads. The book has its light moments and its dark moments, but it moves through everything with this indescribable lightness, easiness.
There are some unfortunate points that made the transition from Jared to Kami slightly confusing, but after a moment, it felt deliberate. They can’t tell each other apart, how should we?

I also loved Sorry-in-the-Vale. I’ve lived almost my whole live in small towns and the feeling of a small town - with some added mystery - was spot on. It seemed very familiar to me and I just loved some of the details that were thrown in, but apparently I can’t find now, though I meant to give you an example.

And just like the rest of the internet, I fell in love with Kami. The book has its very best moments - in my opinion - in its humor that peaks almost every time someone opens their mouth and in its main girl. Kami is so excellent as a narrator, fun to read about and follow her around. There’s one quality that makes me like her so much: she’s got this thing about her that she’ll go through any brick wall if she so decides. She’s not invincible and she knows that, but she will go after the answer if she knows how to find it.

The rest of the cast was perfect, too. They all had their own stories and small details that made them very interesting characters, even though we only glimpsed them.

I guess I have to say something about Jared. Personally, I liked him, but not all of his choices, which is okay. I like imperfect characters. I don’t think Jared knows who Jared is, so how am I supposed to say something about him? And there was a lot of confusion going on in this book, that I hope has been cleared by the second one and then we can get to the making out -I mean solving the crime!

Last but not least, the ending. I’ve seen a lot of talk about this ending and it’s starting to get old a little. Not to say people can’t say their opinion! Go ahead, I’m not saying you can’t say that. Just feels to me it’s being said A LOT. And it makes me feel weird because I liked that ending. I felt it was something that needed to happen, when you thought of some of the things that happened leading up to it.

Final thoughts: If you’re thinking about should you or shouldn’t you buy/read this book, I say go for it! Brennan has the talent of sneaking up behind and whacking you on the head with awesomeness. This book delivers with gothic mansion, secrets, mysteries and trying to solve them and a whole lot of tension! What else would you need?