Interlude: Untold is coming for your soul

So I just got an email from bookdepository that Untold, the sequel to Sarah Rees Brennan’s Unspoken, is on its way to me. It sounds like they’re releasing it a little early, but it’s always good for me when pre-orders are sent out a week earlier than their release day, because that means the book should be here just around the exact day it’s actually released. That’s what happens when you live beyond a big ocean and in a country in which the mailing system is having a teenage crisis.

In case you’ve never heard of this book or you don’t remember right away, I did a flash review of it here and here’s the synopsis of Unspoken:

Kami Glass loves someone she’s never met . . . a boy she’s talked to in her head ever since she was born. Having an imaginary friend has made fitting in hard -but that's never bothered Kami.  She has a best friend, runs the school newspaper, and is only occasionally caught talking to herself. Her life is just the way she likes it.

But all that changes when the mysterious Lynburns return to Kami's village, along with teenagers, Jared and Ash, one of whom is eerily familiar to Kami...
As life as she knows it begins to unravel, Kami is determined to get to the bottom of every mystery. Who is responsible for the bloody deed in the depths of the woods? What is her own mother hiding? And now that her imaginary friend has become a real boy, does she still love him?


I didn’t actually talk or fangirl that much about the book. There are several reasons for this, actually. While I obviously worship the ground which Rees Brennan walks on - she’s seriously one of my favorite authors for several reasons, one of which is that she’s a really awesome person (as far as I can tell) - this book was, well, difficult. It is a really, really, good book. The characters and the mystery we try to solve are absolutely brilliant, captivating and everything is told in a uniquely Rees Brennan -style, that will tickle your heartstrings. And then she’ll leave you bleeding on the floor - which is the difficult part.

A lot of people on the internet have cried out about ending in particular for being painful. And it is because it leaves things so open. There’s a big showdown, stuff happens and characters all around are left hurt, unsure about their safety and feeling pretty shitty. And that’s the way the reader’s left too. What is there to say when the ending takes the rug from under your feet? Rees Brennan plays a gleeful game of chess with your feelings and boom, you have to wait a year. That’s the reason why haven’t talked so much about it.

Of course, the book’s middle part was a labyrinth of awesome things that made you laugh out loud and then it had some serious heart-melting, feels-inducing parts that had you rolling on the floor because it hurt so much. Whenever I think about it, I remember how much I adore this book. But the book is perhaps a little slow, since it’s the first one in the series and I feel sad that I haven’t been fangirling so much over it. It isn’t as showy as some other books are, but it’s got enough drama and magical thunder storms to go around. 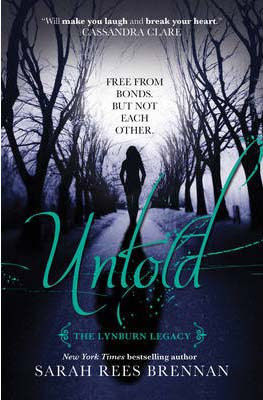 I’m looking forward to Untold but then again, I’m afraid of what will happen. I want to find out what happens and I can tell (well, am hoping) that Rees Brennan will bring her worst - see Demon’s Covenant.
But I think I’ll just end up screaming at characters (read: Jared) who do stupid stuff they shouldn’t do and who just should listen to my advice.

I can’t wait to get my hands on Untold but I’m also afraid what the book will do. It’s so frustrating, not being able to decide whether to be extremely excited or scared. And I can tell that even if I go in scared and ready for the worst, I’ll still end up bleeding on the floor from the attack on my feels.

And last, here's the synopsis of Untold, which really spoiler-y if you haven't read the first one, so stop reading here and go read that one first, if you haven't!

Free from bonds, but not each other

It's time to choose sides... On the surface, Sorry-in-the-Vale is a sleepy English town. But Kami Glass knows the turh. Sorry-in-the-Vale is full of magic. In the old days, the Lynburn family ruled with fear, terrifying the people into submission in order to kill for blood and powe. Now the Lynburns are back, and Rob Lynburn is gathering sorcerers in town. A decision must be made: pay the blood sacrifice, or fight. For Kami, this means more than just choosing between good and evil. With her link to Jared Lynburn severed, she's now free to love anyone she chooses. But who should that be?
Posted by Joa at 7:14 PM