Found the Place to Rest My Head (Lover Eternal by J.R. Ward) 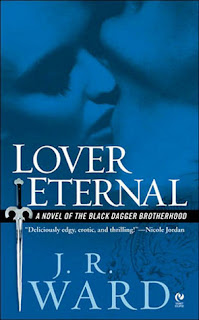 A review of
Lover Eternal by J.R. Ward

In the shadows of the night in Caldwell, New York, there's a deadly turf war raging between vampires and their slayers. There exists a secret bound of brothers like no other-six vampire warriors, defenders of their race. Possessed by a deadly beast Rhage is the most dangerous of the Black Dagger Brotherhood.

Within the brotherhood, Rhage is the vampire with the strongest appetites. He's the best fighter, the quickest to act on his impulses, and the most voracious lover-for inside him burns ferocious curse cast by the Scribe Virgin. Owned by this dark side, Rhage fears the times when his inner dragon is unleashed, making him a danger to everyone around him.


Mary Luce, a survivor of many hardships is unwittingly thrown into the vampire world and reliant to Rhage's protection. With a life-threatening curse of her own, Mary is not looking for love. She lost her faith in miracles years ago. But when Rhage's intense animal attraction turns into something more emotional, he knows that he must make Mary his alone. And while their enemies close in, Mary fights desperately to gain life eternal with the one she loves...

Now, I explained in the review of Dark Lover, how introductionary it was and I’m ashamed to admit, so is Lover Eternal. We see more of the Brothers and their daily lives and more of the actual workings of the world. At this point it really feels more like people are just going about their things and not as, “hey look, this is how we feed”. Since I know how the series goes on, it’s really hard to say does this bother the whole reading experience. I don’t think it’s bad, but it’s still worth mentioning.

At least to me Rhage is the most kind and gentle of the brothers, in the end. And I guess that’s basically the idea with his beast: he’s forced to feel these hightened emotions, forced to wear himself out and to hulk out even though he’d really rather not. It’s a great contrast. And thinking his backstory, I think it really does say a lot about him as a character: that he is this good warrior who you can trust with your life, when you think how he’s forced himself to change. Hell, Rhage is not perfect, but not everyone would be so afraid of hurting others around him. I imagine some would embrace the beast and go on a bloody rampage. But Rhage is highly emotional and he pretty much follows his instincts, which is pretty obvious and can be sometimes a little off-putting: he makes a lot of fast choices and does some highly dubious decisions. It can’t be explained away, but it’s Rhage with all his faults.
It gets me everytime I read this book, the way that Rhage just suddenly makes his world about Mary. It’s a little whiplash-inducing, but I think Rhage is looking for someone to hold onto, someone who can let him relax and who’ll hold him back. It’s somehow a little more bigger and deeper, with his quick instincts and fast decisions and what not.

I like Mary Luce a lot, because she’s head-strong and just a normal lady. When we meet her, she’s basically feeling kicked around by the world and that’s just a feeling that I can understand and I do like the way it’s portrayed: Mary’s feeling a little weak and there are moments when we see her crumbling and doubting herself. I like that, especially when she stubbornly moves on. I think she’s a very stubborn person: she’s decided she’ll survive and so she bloody will. And she doesn’t like leaning on others, because her mother’s seemingly useless faith.
But she’s also a person who likes doing stuff to others, because she hates seeing people - especially those close to her - in pain. This combination of stubborn survival and the need to take care of others is not only interesting, but she’s such a good person. And I also think that that hatred of seeing people hurt is what makes her open up to Rhage at first. And the fact that, you know, he’s incredibly hot and that he seems to care for her honestly and she hasn’t had a lot of that.

And parts of those are the reasons why I like these two together so much. They’re maybe not so obviously a good couple as Wrath and Beth are - with them we basically see this connection just happening the moment they meet. They meet and zap! they have this chemistry. With Rhage and Mary, you have these two people, who both feel like the world’s kicked them about a lot and are just waiting for that final hit. They’re both stubborn as shit, but then, Rhage is more emotional and Mary is more reserved with her feelings. They’re two people, who are the same in some ways, but then where they are different, they compliment each other. And I love it how they begin to see that in each other throughout the book.

Okay, so what most grates me about this books is definitely the way that Rhage introduces and tries to get to know Mary. It does fit his character as the ladies man who’s used to women falling for him - but that’s just it. He’s used to women doing what he wants, he expects them to do this for him. And he is so very pushy! And Rhage is generally a good guy, gentle and caring so it’s a horror to see him act like every other douchebag. I love Lover Eternal for many reasons - Mary and Rhage’s dynamics are awesome - but I don’t how to tell you about this. It sucks but we love him anyway? I feel like by saying that I’m saying it’s okay when men try to do it in real life.

Lover Eternal introduces some of the main players in the next books. I’m not referring to the introductionary thing I’ve been talking about, but here, as I’ve read this before, the game has already begun. We start to see these characters as who they really are but we don’t that yet. Some new characters are introduced and we’re given hints about them, too. Ward uses foreshadowing quite a lot, you see pieces of important things in earlier books. It’s not very obvious, but you can sort of see that they could be important.

Also, with  Lover Eternal begins the tradition of A) the next books heroine and hero meeting - this doesn’t always happen, but more often than you’d think, the next couple is shown interacting. But, there could be two couples meeting and one would be in the next book and the other in the book after that. Ward can be sneaky. B) the book’s title being worked into the dialogue. Now, some hate this but I’m a secret fan. It can be rather obvious and silly, but with these titles being rather easy for a books like these, they’re not weird in the conversation. I just like them and they’re not big moments if you don’t.

Before I end this, I have to say something about John Matthew. He’s first introduced in this book and while I’m not saying he or his storyline are perfect, he’s pretty damn awesome. And his story is heart-wrenching. I think he begins another important side to the series and I adore this book especially for introducing him. I truly want to say more, but that would be too spoiler-y. Just keep an eye on him!

Final thoughts: Lover Eternal definitely picks up the speed from the previous one and introduces even more delicious characters. Rhage and Mary have a sort of tragic-turned-lovestory -thing going on and Ward handles it perfectly. In this one we really see the Brothers as males who live and fight together and who would die for each other -it’s one of my personal favorites. And of course, there’s John Matthew, quite possibly the best character ever.