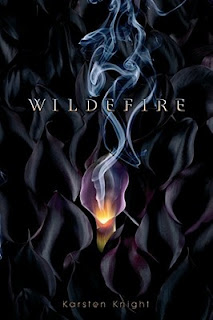 A flash review of
Wildefire by Karsten Knight

Every flame begins with a spark.

Blackwood Academy was supposed to be a fresh start for Ashline Wilde. A secluded boarding school deep in the heart of California's redwood forests, three thousand miles from her old life - it sounded like the new beginning she needed after an act of unspeakable violence left a girl in her hometown dead.

But Blackwood is far from the peaceful haven Ashline was searching for.
Because terrifying, supernatural beasts roam the forests around campus.
Because the murderer from Ashline's hometown - her own sister - has followed her across the country.

Because a group of reincarnated gods and goddesses has been mysteriously summoned to Blackwood...
... And Ashline's one of them.

I found this book almost by accident, but when I read an excerpt in which Ashline kicks ass, I was hooked. I love me a girl who can kick ass.

Ashline Wilde, the main character, is spirited and still insecure in other ways. For some heroines, the heroic actions and sacrifices come easily, but that’s not the feeling I get with Ash. I like it that she just sort of goes with it.
Ash’s life was shaken up by the things that happen at the beginning of the book. She’s a little lost because of that, but she’s still sure of herself. That’s obvious in how she’s extremely independent, almost to a fault. She doesn’t want to rely on others, but has to take care of things by herself. I think she definitely hates being a burden and doesn’t like burdening others, so she tries to take care of things herself. Some of it might also come from the fact that her trust has been betrayed badly before. Basically, she’s got a smart head, but her need to take care of things by herself gets in the way.
I like the fact that she’s still got her friends, even though she has some lone wolf traits going on. She doesn’t hate on people easily - possibly because she’s been there herself - unless it’s with a good reason.

The side characters are just as well handled as the main character. I’m trying to be cautious and not say anything specific, so I won’t spoil you.
There’s quite a lot of characters with Ashline and I love how some seemed like a typical stereotype, but turned out to be the almost opposite. And I also loved how we were shown through Ash’s perspective that she made mistakes in judging people: they turned out to be something else other than they thought, that the characters had more sides to them than she had thought.

The plot isn’t something that I guessed but it’s very simple. And there’s nothing wrong with simple, in fact I liked it that the action wasn’t the main thing. It’s more about following the character about their normal lives and then something strange happens and more of than not, someone does something seemingly out of character. This book just seems to show only pieces of a bigger mystery that’s going on behind the scenes. And frankly, from what I’ve read about the second book, I think there could be enough good stuff for a long series. Knight gives us just enough of hints of the mystery to make us curious and I’m definitely curious to find out what is going on.

The idea is original, even you might stop for a second when ancient gods are mentioned. They’re used a lot in literature and co., but Knight succeeds in making them his own. Like I said, it’s more about the characters themselves than the massive powers they’ve got. I’ve read other books that have done that before - downplayed the god-aspect and made them more “normal - and I seriously have to applaud Knight for handling it the best.

And the writing is excellent. I’m not sure how to describe it, but it flows well, fastly paced at some times and then it calms and the humor just jumps out behind a tree. I love how there’s sort of this sense of normalcy and then a huge tragedy strikes or after a wild action scene there’s humor where you wouldn’t expect it.

Final thoughts: I liked the book, it was a great read that had me jumping up and down and laughing aloud. The whole god-thing, mythology and mystery is tied well together. The book has got some serious “What are you doing, you’re not doing that, stop it!” -scenes going on and I love them. Also, Knight is pretty good at cliffhangers or just giving important hints and not revealing more.
Posted by Joa at 9:26 PM