If You're Chained (Ash by Malinda Lo) 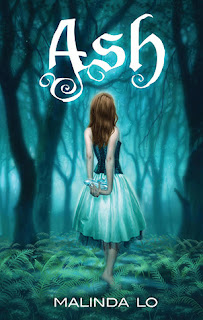 Review of
Ash by Malinda Lo

In the wake of her father’s death, Ash is left at the mercy of her cruel stepmother. Consumed with grief, her only joy comes by the light of the dying hearth fire, rereading the fairy tales her mother once told her. In her dreams, someday the fairies will steal her away, as they are said to do. When she meets the dark and dangerous fairy Sidhean, she believes that her wish may be granted.
The day that Ash meets Kaisa, the King’s Huntress, her heart begins to change. Instead of chasing fairies, Ash learns to hunt with Kaisa. Though their friendship is as delicate as a new bloom, it reawakens Ash’s capacity for love—and her desire to live. But Sidhean has already claimed Ash for his own, and she must make a choice between fairy tale dreams and true love.

Entrancing, empowering, and romantic, Ash is about the connection between life and love, and solitude and death, where transformation can come from even the deepest grief.

Reading Ash I was reminded of the fairytales I used to read as a child and I just loved that feeling of fairytaleness that the book has. There's a dreamy feeling to it and a small detachedness. It's not a bad thing, you know, like in books where the narrator is very dull? It's not like that, but that feeling at least for me came from the fact that the girl seems very caught up in her own world and far away from the reality that everyone else is living in. That was heartbreaking for me and honestly, the way her life goes made me just want to hug her, because she sure deserves it. And that “detachedness” just made me fall in to the book more - I read it in one sitting.

I liked Ash, the moment I began to read the book. She seems like a dreamer that’s had to fight for her right to dream. And well, then there’s the Cinderella-aspect, which I think was done well, in the sense that you know, she has to work and it’s really not a good fate, but Ash doesn’t whine about it. Of course, her stepmother brainwashes her a little, but Ash is loyal and honest and so, she does the work.
I liked that not all the characters in the book thought she was worse than dirt. I loved how one of the stepsisters, Clara, treated Ash nicely enough, though she really had no obvious reason to do so.

The King’s Huntress, Kaisa - let me tell you, it still shocks me everytime I read that name and I love it. Kaisa’s down to earth and I think she’s in the beginning a little more taken with Ash, which is adorable. That was the feeling that I got. I think to Kaisa Ash is this mysterious being that just pops up to amaze her. And I do like the fact that she’s almost a background character to Ash’s story and that she doesn’t really mind it - even if she does want to help, it’s Ash’s life.

Also, I did like the way Ash and the huntress' relationship was played. It wasn't big and dramatic, but there was a lot of feeling. It really was like it is in fairytales, that the smallest thing has the biggest meaning. I personally felt that the huntress at first vowed Ash, because she was like something that had stepped out of a fairytale book, as captivating as the fairy prince. But then, Kaisa sort of shows that she's down to earth, simple in her ways and I think that Ash realizes she likes that more than the extravaganza danger of the fairies. She just wanted out of a shitty life and the huntress proves that it doesn't have to be something chosen for you but something that you choose. And that you can choose. I'm not sure if I'm putting this in to words well enough - I feel like words simply fail me with this book, it's somehow just out of my reach. But what I most feel like is that the huntress is the anchor that brings the girl to the real world and shows her it doesn't have to be all pain and that you have the choice, that you can make it as brilliant as you want.

The worldbuilding is exquisite. Though we may see very little of it, we do see that there’s a big, big world out there. We’re shown just small pieces, these lovely little details that make me want to explore it more. And I loved how the fairies were incorporated in to the world, how they were seen as these fairytales or legends and myths, where you could guess that they were sort of glorious and deadly, but you really were just guessing because fairies. I’ve read very few fairy-themed books that I really felt like I could truly get in to - just my fault, I’ve read amazing fairy stories, but it’s just me  - and I really loved how it was done here. It’s very mysterious and there’s a lot of extravaganza, but then again, it feels very simple, that it’s like everyday for the fairies.

Lo’s writing is most excellent. It’s detailed, but the details don’t slow the book down, they just add these tiny details that we pass by. And they make it just bigger and oh so much better. And the little details make the book’s time-jumps that much more easier to follow. In the end, the details and the basic flow of the writing is just to die for.

Final thoughts: You like fairytales? If you do, I suggest you read this, it reads almost like a fairytale. And Lo’s writing is so detailed and glorious and the characters are amazing and there’s magic. Truly, this books stands out for me from all the fairy books and all the fairytale-ish books just because of the way Lo writes. She’s definitely been added to my favorite authors list.